“In 2014, I taught myself how to crochet primarily through Youtube. It started with me watching Yarn Scrap Friday videos by Happy Berry Crochet hoping that one day I would be able to do the same thing and make my own toys. At the time I was only 10 years old and I thought that my classmates would judge me when I brought balls of yarn to school next to my lunch box and school work. However, the love for crochet soon consumed me and I found the area under my desk spilling out with yarn skeins. Soon my parents bought me a large bucket to place all the yarn I was buying.

The first amigurumi I ever crocheted was a 5 inch sphere made with this really beautiful green, blue and brown variegated acrylic yarn. Seeing the 3D object form in my hands rather than just scarfs and washcloths was addicting and I knew I had found myself a new hobby. This hobby would later turn into my business, Nerdy Crochet LLC. The next few toys I made were dolls from my own patterns. I could not read other people’s patterns at the time so I decided to create my own designs instead. The dolls are still in my stash today, although their arms have long since fallen off due to my sub-par sewing skills at the time.

Once I was able to read other people’s patterns, I began to teach others. I started with my close friends and people in my class who had begun to envy my crochet rather than make fun of it. Learning to teach others was challenging but worth it as I saw the understanding in their face and the same excitement when a toy began to form in their hands. From there I made my own patterns. I found that creating nerdy patterns such as LEDs, chemistry kits, and biology blood cell kits was what I was most interested in doing.

That is why in September of 2018, I decided to start my own business, partly because I was making too many toys to keep myself but also partly because I wanted to make a difference. By selling these nerdy STEM related toys I would be able to foster an interest in young kids when it came to such subjects. Not only that, by donating 50% of the price of all my STEM-related toys I would be able to provide the same type of support when it came to science, technology, engineering, and math that I got from my parents and friends as a young girl, to other young girls through organizations that promote such learning.

Today I sell on my Etsy and at in person shows near Denver, Colorado.

If you are interested in your own Nerdy Crochet toy, check out my Instagram or my Etsy.

For all pdf patterns, paid patterns and completed pieces! The best way to support Nerdy Crochet is by choosing our paid PDF patterns or adopting a nerdy toy of your own. 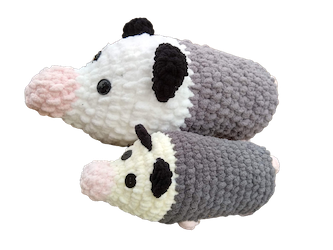